Volunteer of the Month

Promoting Community Service
The Mayor’s Volunteer of the Month Award recognizes Marysville citizens for their volunteer contributions and commitments to community service. Volunteers from all areas of Marysville are eligible. The voluntary service demonstrated should be unpaid and not an employment responsibility. Volunteer service helps to conserve taxpayer dollars. 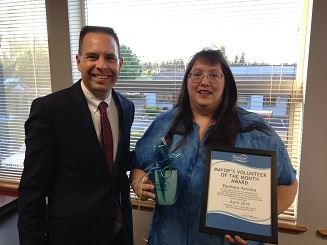 Do you know someone whose service and dedication to the community makes them the perfect candidate for Volunteer of the Month? The mayor wants to hear from you. Complete and submit an online nomination form. Be sure to read the accompanying eligibility criteria, instructions and tips for completing the nomination form before you submit it.

April: Renee Bigwarfe and Betty Wright for their volunteer work with the youth in our community at Marysville Middle School
June: Roger Gable for encouraging active citizenship among the youth in our community
September: Kim Shumway for increasing accessibility of the theater as a volunteer for the Red Curtain Foundation for the Arts
October: Emily Wicks for ensuring the children in our community have the school supplies they need for a successful education
November: Kyle Burgess and Matt Benjamin for outstanding contributions to local emergency management planning and preparedness

February: Zoe Wlazlak for her dedication to the Marysville Emergency Cold Weather Shelter
March: Dawn Hackett for coordinating rides for cancer patients to and from treatments
April: Jim Strickland for long-time community advocacy for people with disabilities
June: Nelly Osborn for her hard work and upbeat attitude as a volunteer for Marysville special events