The 0.2% sales tax increase will generate enough revenue to continue to preserve and repair Marysville's streets during the next 10 years ($16 million/$1.6 million per year). It will raise the sales tax rate in Marysville from 8.6% to 8.8%, effective Oct. 1, 2014. Marysville's tax rate will still remain lower than most cities in Snohomish County, which range from 7.7% to 9.6%.

Sales taxes are paid by everyone who shops in Marysville and uses Marysville streets and services, not just Marysville residents. State law requires that all revenue generated by the TBD be spent only on TBD-designated projects. 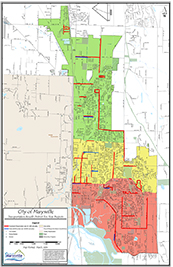